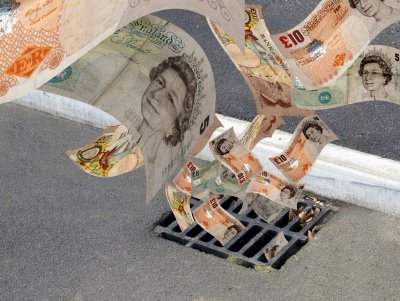 Craig Morgan contacted me in December 2015. He is British by birth and a builder by trade. He's also a down-to-Earth businessman and an atheist, but even he was deceived into pouring hundreds of thousands of pounds into the 'Mormon'-controlled blame-the-victim 'MLM income opportunity'  racket known as 'Forever Living Products.'

So how on Earth did this happen?

Craig Morgan remains very concerned for his ex-wife, but he also wants to put a stop to the 'FLP' racket.

I have to say, that in 20 years of investigating 'MLM' rackets, other than Eric Scheibeler, I have rarely come across an 'MLM' whistle blower of the calibre of Craig Morgan. He says that he is prepared to face absolutely anyone over this.

(Perhaps it's just a coincidence, but immediately after this article was posted, all the above linked-videos - featuring Teresa Jones telling scripted-lies - suddenly vanished from the Net).

Teresa Jones is one of a significant core-group of 'FLP' adherents who has undergone  the classic radical 'MLM' personality transformation. For the last 9 years, she has been recklessly dissipating all her mental, physical and financial resources to the benefit of the multi-millionaire 'Mormon' bosses of the 'FLP' racket whom she has continued to trust, and follow, no matter what suffering this has entailed.

For 6 years (out of love and loyalty) Craig Morgan secretly subsidised his wife's financially-suicidal 'FLP'-related activities, falsely believing that he was investing in both their futures. During this entire period, Teresa kept her financial records hidden, and Craig only discovered the full truth about his wife's debts 4 years ago, when she dumped him (because he was so physically weakened ,and impoverished, that he was no longer of use) and the couple divorced. Lawyers, and a judge, then became involved, and Teresa's tragicomic accounts were finally declared. The judge commented that she wasn't really in business at all and that, consequently, her so-called 'FLP business' was worthless. In the divorce Craig sought to recover £55 000 which he had inherited from his mother, but he discovered that Teresa was insolvent to the tune of hundreds of thousands of pounds. Although Craig was awarded £20 000, and access to his private belongings, in reality, (after legal fees) he's received virtually nothing from his divorce.


Teresa Jones 'Upline Network Leader' has been Adam May, but she's also been completely under the influence of 'MLM Mindset' Guru, Dave O'Connor. It is these sinsister racketeers who have been gathering confidential information from Teresa Jones (on the pretext that they want to help to succeed) and using it to rob her and everyone around her.

It's taken Craig Morgan until today to feel strong enough to speak out publicly. Previously he had been falsely blamed for his ex-wife's debts and depicted by her as a violent and abusive liar and negative loser. Indeed, for a while, Craig was placed under such stress that he required psychiatric counselling and he also developed heart problems.

This is a brief transcript of Craig Morgan's testimony to me (Craig is dyslexic):

December 2010 my mother very unwell. 4 months she was in and out of hospital I was told she only had short time to live
Teresa never once came to see my mother, she had too much to do with her business
Whilst she was ill, my mum gave me and my brother £10000 each. I gave Teresa £5000 because I new she was having money problems because of FLP
The night my mum died, I had to drive Teresa and some of her team to the airport in the early hours of the morning for a Flp profit share rally. She had to go, she had to be there for her team
I had not slept for 3 days
Forever was far more important than the death of my mother and my health
Yet after that when they returned from rally there were people within the business more intrested and sim pathetic
At that time of loss and greath I was weak
In the following months I had to clear my house and put it on the market
July was at a forever training a member of the team rushed to hospital heart scare
In and out of doctors they said due to stress I was getting problems
When I was emptying property there was some forever People
Asking if there is anything that you don't want
Being weak at the time kind and unwell
I gave most of my mums things away
Now I no that they were telling people how well they were doing
But happy to have hand outs
Probably to sell to prop up there Flp dream
In November /December
My X paid on my credit cards(at that time she had no credit rating because of her over spend)
So she bought car plan to get profit share
It cost thousands what bullshit
In December I handed over and I have records of this £50000
I said it was to pay the dept so it would make are life better
Later I found out she paid around £10000 of it to take her mother brother and of course me on a cruse for here mums 80th birthday
She said here business paid for this more bullshit for the Flp facade
Look how well I'm doing
February Budapest for profit share ( I was very unwell)
At this time I've had to much bullshit wanted know more
When we were there she paid on my card a river cruse for her team
And lots of other things were put on my credit cards
She told the team profit share is paying more bullshit
I walked across stage with here for profit share
It was less than £2500 grand
It cost more to buy it
The death of my mother had paid for this bullshit
More lies to make Flp look GREAT
Left the hotel I had a very very big room service bill
I had spent most of the time in bed
Thank forever
On the flight back the flight team were great they could see how unwell I was
They were that concerned they said they would divert
I said no just get me home
And on the flight a forever person was prospecting a trapped person in the seat by them (they are sick)
It took me two weeks to feel well
It was a Saturday took my wife out for lunch needed to talk to her
Back from profit share rally we had had more bullshit from forever team
I wanted lunch a talk about the future
Not been there 10 mins she started to prospect the waiter
I said no more I wanted to do something else was not going to give anymore to Flp
Will not say what she said I will leave that to you
3 weeks later mid Atlantic on the cruse (that the death of my mum paid for )
I was told she did not love me had not helped here in her. Flp life / business / bullshit
She dumps me yet some other victim bleed dry by Flp
A fun 16 months
Death
Bad health
Sale of a family home
Divorce
And robbed
It's the forever way
And remember a friend in forever is a friend for life

After witnessing robotic 'MLM' recruiters amongst their own friends and families, a number of members of the British Internet forum, Mumsnet, created the concept of Bot-Watching (i.e. laughing at the scripted antics of 'MLM' adherents, but with the serious goal of shining a light on the problem).

Mumsnet members have recently created 'Timeless Vie' -  a outrageously funny exposure of 'MLM' cultic rackets in general, but particularly those which have mainly preyed on women. 'Forever Living Products' seems to be the most virulent 'MLM' racket of this type, currently infesting the UK.

Mumsnet has brought together the most significant group of insightful, and determined, people in the UK ever to start to examine the 'MLM' phenomenon. They have quickly uncovered the extraordinary scale, and underlying cultic nature, of the problem: the disturbing results of which have been all-too evident on social media.

'Timeless Vie' is a valuable attempt to halt the spread of the 'MLM' fairy story, but its creators accept that they have little chance of influencing the most gung-ho 'MLM' fanatics.