'Advocare,' another 'Amway' copy-cat blame-the-victim 'MLM' cultic racket, has been partly exposed by the US Federal Trade Commission.

Two years ago, the US Federal Trade Commission strolled into action and successfully went after 'Advocare,' and its bosses, for being a front for a pyramid scam dissimulated as a 'Multi-Level Marketing Direct Selling Income Opportunity.'

For years, 'Advocare' propaganda had boasted that the company was an 'Award-winning member of the Direct Selling Association'.

'AdvoCare is an award-winning member of the Direct Selling Association (DSA), which represents companies offering entrepreneurial opportunities to independent sellers to market and sell products and services. To protect the more than 20 million Americans involved in direct selling, the DSA instituted the Code of Ethics, a robust series of policies holding member companies to the highest standard of excellence. AdvoCare strongly adheres to the DSA Code of Ethics., demonstrating our commitment to the highest ethical business practices to protect our Independent Distributors and consumers, and was recognized as a participant in the DSA Code of Ethics Communications Initiative.'

Evidently, the so-called 'Direct Selling Association' must have been part of the racket, whilst the FTC has just released the following statement concerning refunds to 224 000 victims of 'Advocare' (and the so-called 'DSA'), but despite decades of quantifiable evidence to contrary, FTC officials evidently continue to believe that 'Multi-Level Marketing' is an economically viable and legal form of 'business.'

This again begs the common-sense question: have FTC officials been stupid, and/or corrupt?

The FTC is returning more than $149 million to people who lost money to AdvoCare International, a former multi-level marketer that the FTC says operated a pyramid scheme disguised as a business opportunity and swindled hundreds of thousands of people who signed up to be distributors of its health-and-wellness products.

The FTC sued Texas-based AdvoCare, its former CEO, and its top promoters in 2019, alleging the defendants deceived people into believing they could earn unlimited income, attain financial freedom, and quit their regular jobs by becoming distributors for the company. In reality, the FTC alleged, the vast majority of AdvoCare distributors either earned no money or lost money.

According to the lawsuit, AdvoCare’s compensation plan required distributors to buy thousands of dollars’ worth of AdvoCare products to be eligible for cash bonuses and other rewards and, in classic pyramid scheme style, compensated the distributors for bringing new recruits into the business, rather than for selling products to customers. 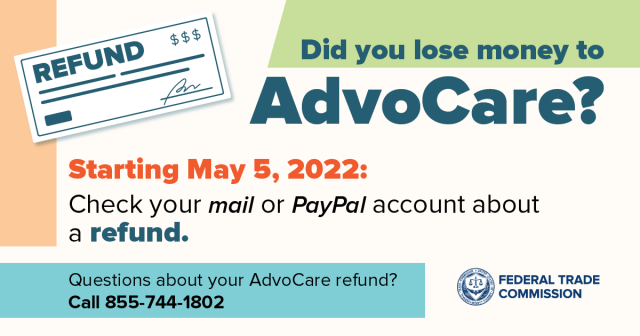 To recruit people, the FTC alleged, the defendants told distributors to make exaggerated claims about how much money ordinary people could make — as much as hundreds of thousands or millions of dollars a year. The FTC alleged that distributors were told to create emotional narratives about how they gained financial success through AdvoCare and to instill fear in potential recruits that they would suffer from regrets later if they declined to invest in AdvoCare.

As a result of the settlement, the FTC is sending payments to more than 224,000 people who lost money to the alleged scheme. The payments are being distributed by PayPal and by check.

One thing to know: The FTC never requires people to pay money or provide account information to get a refund or to cash a refund check.

More than half a century of quantifiable evidence proves beyond all reasonable doubt that:

________________________________________________________________________
*A 'Long Con' is a form of fraud maliciously designed to exploit victims' existing beliefs and instinctual desires and make them falsely-believe that they are exercising a completely free-choice. 'Long Cons' comprise an enticing structured-scenario of control acted out as reality over an extended period. Like theatrical plays, 'Long Cons' are written, directed and produced. They involve leading players and supporting players as well as props, sets, extras, costumes, script, etc. The hidden objective of 'Long Cons' is to convince unwary persons that fiction is fact and fact is fiction, progressively cutting them off from external reality. In this way, victims begin unconsciously to play along with the controlling-scenario and (in the false-expectation of future reward) large sums of money or valuables can be stolen from them. Classically, the victims of 'Long Cons' can become deluded to such an extent that they will abandon their education, jobs, careers, etc., empty their bank accounts, and/or beg, steal, borrow from friends, family members, etc.

_______________________________________________________________
** The enticing structured-scenario of control fundamental to all 'rigged-market swindles' is that people can earn income by first contributing their own money to participate in a profitable commercial opportunity, but which is secretly an economically-unviable fake due to the fact that the (alleged) opportunity has been rigged so that it generates no significant, or sustainable, revenue other than that deriving from its own ill-informed participants. For more than 50 years, 'Multi-Level Marketing' racketeers have been allowed to dissimulate rigged-market swindles by offering endless-chains of victims various banal, but over-priced, products, and/or services, in exchange for unlawful losing-investment payments, on the pretext that 'MLM' products/services can then be regularly re-sold for a profit in significant quantities via expanding networks of distributors. However, since 'MLM' products/services cannot be regularly re-sold to the general public for a profit in significant quantities (based on value and demand), 'MLM' participants have, in fact, been peddled infinite shares of their own finite money (in the false expectation of future reward).

Thus, in 'MLM' rackets, the innocent looking products/sevices' function has been to hide what is really occurring - i.e The operation of an unlawful, intrinsically fraudulent, rigged-market where effectively no non-salaried (transient) participant can generate an overall net-profit, because, unknown to the non-salaried (transient) participants, the market is in a permanent state of collapse and requires its non-salaried (transient) participants to keep finding further (temporary) de facto slaves to sustain the enticing illusion of stability and viability.
Meanwhile an insignificant (permanent) minority direct the 'Long Con' - raking in vast profits by selling into the rigged-market and by controlling/withholding all key-information concerning the rigged-market's actual catastrophic, ever-shifting results from its never-ending chain of (temporary) de facto slaves.
Although cure-all pills potions and vitamin/dietary supplements, household and beauty, products have been most-prevalent, it is possible to use any product, and/or service, to dissimulate a rigged-market swindle. There are even some 'MLM' rackets that have been hidden behind well-known traditional brands (albeit offered at fixed high prices). Some 'MLM' rackets have included 'cash-back/discount shopping cards, travel products, insurance, energy/communications services' and 'crypto-currencies' in their controlling scenarios.
No matter what bedazzling product/service has been dangled as bait, in 'MLM' rackets, there has been no significant or sustainable source of revenue other than never-ending chains of persons under contract to the 'MLM' front companies. These front-companies always pretend that their products/services are high quality and reasonably-priced and that for anyone prepared to put in some effort, the products/services can be sold on for a profit via expanding networks of distributors based on value and demand. In reality, the underlying reason why it has mainly only been (transient) 'MLM' contractors who have bought the various products /services (and not the general public) is because they have been tricked into unconsciously playing along with the controlling scenario which constantly says that via regular self-consumption and the recruitment of others to do the same, etc. ad infinitum, anyone can receive a future (unlimited) reward.
I've been examining the 'MLM' phenomenon for around 20 years. During this time, I've yet to find one so-called 'MLM' company that has voluntarily made key-information available to the public concerning the quantifiable results of its so-called 'income opportunity'.
Part of the key-information that all 'MLM' bosses seek to hide concerns the overall number of persons who have signed contracts since the front companies were instigated and the retention rates of these persons.
When rigorously investigated, the overall hidden net-loss churn rates for so-called 'MLM income opportunites' has turned out to have been effectively 100%. Thus, anyone claiming (or implying) that it is possible for anyone to make a penny of net-profit, let alone a living, in an 'MLM,' cannot be telling the truth and will not provide quantifiable evidence to back up his/her anecdotal claims.

Although a significant number of 'MLM' front-companies (like 'Vemma', 'Fortune Hi-Tech Marketing', 'Wake Up Now') have been shut-down by commercial regulators, some of the biggest 'MLM' rackets (like 'Amway' ,'Herbalife', Forever Living Products' ) have continued to hide in plain sight whilst secretly churning tens of millions of losing participants over decades

The quantifiable results of the self-perpetuating global 'Long Con' known as 'Multi Level Marketing,' have been fiendishly hidden by convincing victims that they are 'Independent Business Owners' and that any losses they incurred, must have been entirely their own fault for not working hard enough.
Blog readers should observe how (in the above linked-videos) chronic victims of 'MLM' cults are incapable of describing what they were subjected to in accurate terms. Even though they are no longer physically playing along with the 'Long Con's' controlling-scenario, they unconsciously continue to think, and speak, using the jargon-laced 'MLM' script - illogically describing themselves as 'Distributors.'

Chronic victims of blame-the-victim cultic rackets who have managed to escape and confront the ego-destroying reality that they’ve been systematically deceived and exploited, are invariably destitute and dissociated from all their previous social contacts. For years afterwards, recovering cult victims can suffer from psychological problems (which are also generally indicative of the victims of abuse):